​* We proclaim the hope of the church as it is revealed in sacred Scripture, understood by the Catholic Church, and expressed in her liturgy. We focus on four elements of the blessed hope: the visible return of our Lord Jesus Christ, the coming fullness of the Kingdom of God on earth, the resurrection of the body, and the wedding feast of the Lamb.

* We promote a practical lifestyle of awaiting the Lord's return in a spirit of simplicity, joy and obedience to the Holy Spirit. We especially encourage women to embrace their prophetic bridal calling in the church and so contribute much to her readiness for Christ's Second Coming.

* We pray and work for Christian unity in the conviction that Jesus is coming back for one Bride. We engage local churches and ministries wherever possible so that with one voice the whole church prays: "Come, Lord Jesus!"​

​
​Terri Celmer serves as President of Blessed Hope Communications, Inc. Terri has been active in the Catholic Charismatic Renewal since 1975. She was healed of Stage IV Metastatic Melanoma in 1996 and discerned a call from the Lord to serve the Holy Spirit's preparation of the church for the Lord's coming in glory. In the Great Jubilee (2000) she dedicated her life to the Holy Spirit's work of preparation. Graced with gifts of prophetic teaching and spiritual accompaniment she contributes to the spiritual formation of Christians and Messianic Jews worldwide.

Blessed Hope Communications, Inc. was formed soon after Pope Francis was elected pope in 2013. Prior to that time, Terri Celmer carried on her spiritual service as an individual Catholic with the support of her husband and pastor.
​ 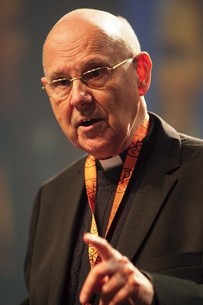 We are united with the cloud of witnesses serving the Spirit's work of preparation from heaven.

​The late Fr Peter Hocken served as theological adviser to the ministry until his passing in June 2017. He left behind an extensive digital library of teachings which can be accessed at www.peterhocken.org. Fr Peter was ordained a priest for the Catholic Diocese of Northampton, England in 1964. He received his PhD in 1984.  He was a member of the Theological Commission for International Catholic Charismatic Renewal Services since 2003. He was a key member of the Catholic - Messianic Jewish dialogue and a member of the committee for Gatherings in the Holy Spirit between Catholics and independent charismatic leaders.  ​Fr Hocken resided in Hainburg, Austria since 2008.
​
Powered by